3 Properties for rent in Jardim Botanico 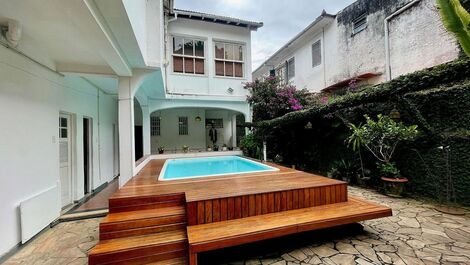 Being a lovely neighborhood surrounded by greenery, standing on the slope of Corcovado and near the Lagoa Rodrigo de Freitas, one of its main features is to have a milder temperature than the average of the entire city. An important curiosity is that the neighborhood takes its name because of the garden and ecological reserve called Botanical Garden, site survey and cultivation of specimens from Brazil and the world's flora.

While some other affluent neighborhoods of Rio de Janeiro has lifestyles more facing the sea and beaches, usually residents of neighborhoods like the Botanical Garden, Gávea, Cosme Velho and Laranjeiras, and Alto da Boa Vista, has a lifestyle at least historically more focused on green and contemplation of nature and mountains.

Generally existing homes condominiums on the site are for the upper middle class, and the addresses situated in the most quiet streets of the highly valued neighborhood.

In colonial times was the farm, and also in its limits a sugar mill and later in the early 19th century an old gunpowder factory, factory that this is now an archaeological site called "House of drumsticks."

With the coming of D. João VI to Brazil in 1808, the site gained attention in the same year, with the creation of the Real Horto side of gunpowder factory. That time, the Royal Garden was often visited by the then Prince Regent.

The neighborhood came to have some factories in its limits in the late 19th century and early 20th century A large factory had even village houses that rented for workers. And in terms of real estate speculation, many of them were demolished. The site, which today is occupied by facilities of Globo, previously also been occupied by houses of villages to workers of a large factory that existed on the site.

Currently the neighborhood is predominantly residential and occupied by buildings filled with apartments, which since the second half of the 20th century replaces the single-storey houses and townhouses.

Shops and attractions of the Botanical Garden

Besides being super known because of the garden or the Botanical Garden, the district has among its attraction points Lage Park which is another ecological reserve, the Rodrigo de Freitas Lagoon, which is very close, and also match the Jockey Club or Hippodrome Gavea, which is located on the border of Gavea neighborhood.

The Globo network has its headquarters at Rua Jardim Botanico, and also a studio and production center located in a street perpendicular to the neighborhood J. Botanical Street. The headquarters of Globo journalism is in the neighborhood, as well as some companies of audio visual activities that service the globe or advertising agencies has been installed nearby.

Many bars and restaurants have successfully settled in the neighborhood, becoming even a gastronomic pole. Near Rua Pacheco Leão, there is plenty of night movement due to restaurants and trendy bars.

The tourist potential of the district attracts the attention of several good and large construction companies that increasingly invest in new buildings. Fact that generates benefits to tourists looking for a flat or house for Rent in the neighborhood of the Botanical Garden.

TemporadaLivre knows the best apartments and second homes in the city and gather all the offers in one place to help you plan your trip.

Houses and apartments to rent for season

When you search for apartments or houses for rent per season in the Botanical Garden, use our filters to help you choose the features that best fit their will. Renting a house, even for the season, it is a matter of attention to detail.

Publish properties in the Botanical Garden for rent for season

If you are the owner or property manager (broker, real estate) and want to rent property in the Botanical Garden, know that TemporadaLivre is the best rental portal for the season in Brazil. Do not waste time: see how season still advertise and put your property to work for you!